A haze of steam shimmered and shone as it climbed it way from the morning grass toward the  warmth of the sun. It was an excellent way for children to clean their feet; cooling their soles as the as they walked on what felt like the softest and greenest of porcupines.

Spring was dawning after the longest of winters. Long, dark horizons leered day and night over the landscape casting shadow on the songbirds who jostled for position during the few glimpses of sunlight available to them. The frost had its enemies, but made its allies, too. The earth appreciated the layers of ice as it recuperated after autumn trudged it to mud: although the cart tracks and foot prints remained. 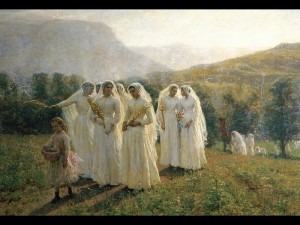 Soon they would come. They would bring the light with them.

Every year we waited. The boys would stare as the ladies would arrive dressed in silks and lace wearing hats of all shapes. Their faces would be painted in bright colours, but their lips would be as crimson as the setting sun. Girls would dance and braid their hair as the men’s armour would glint in the spring sun as the hooves of their horses trotted rhythmically with the wind. It would be a happy time.

However, all we could do is look in wonder as the procession passed. Try as we might we could never become them. They smiled at us; loving, genuine smiles that disarmed and distracted leaving with them a wake of warmth. But we couldn’t smile back. Not in the same way. Our smiles were shy, inquisitive smiles. Some children smirked as their mothers tugged at their arms reminding them of their manners. Children would always be children.